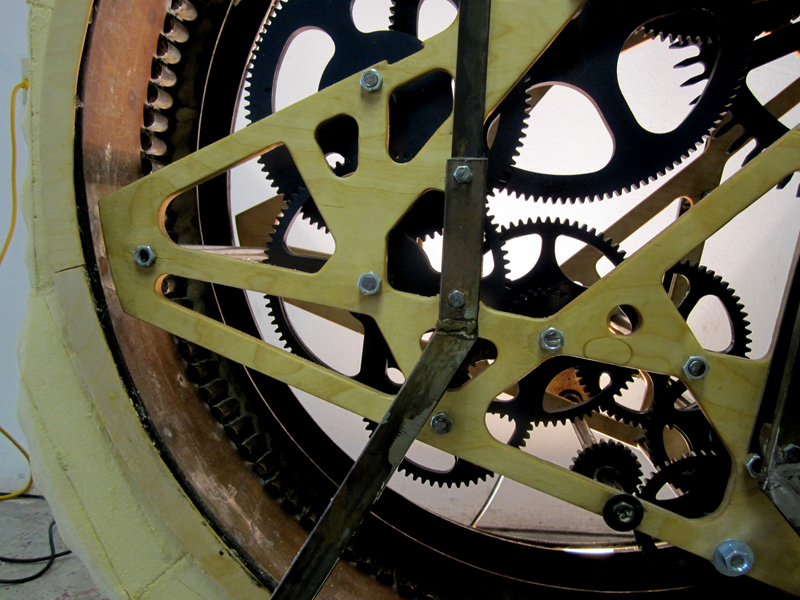 The concept behind Nano-City” is that technological advance and ecological responsibility are not necessarily a contradiction in terms. We believe that technological development from within the fields of design and architecture can be focused to transcend ecological equilibrium. NanoCity is an interactive robotic city moving across the landscape demonstrating a mass-balance of resources. Both the city and the landscape are made of the same material. At the forefront there are many small mining robots which are milling up the landscape, next there are constructor bots that are building the city. As the city moves along there are bots at the back of the city that are breaking down the city and lastly bots that are reconstructing the landscape.

The backstory….
The head of the city resembles a massive mechanical cathedral but would fool anyone who examined it for too long. For all of its apparent symmetrically flaunting oppressiveness, it is nonexistent. Indeed at any instant it does exist but it is ever changing, morphing, melding, destroying and creating. Itself. For the city itself is in fact one and the same with the landscape that it ploughs through. The city moves across the planet without regard for the forests, the seas, the deserts and the glaciers. For any and all landscapes is fuel for its growth. The city is a momentary composition of tiny machines, so tiny that they operate at the atomic and molecular level. The machines are just as invisible as the atoms they are composed of. Essentially the entire city is composed of nano-sized robots. There are gatherers, sorters, transporters, assemblers and dis-assemblers. The assemblers work endlessly immersed in a bath of parts or molecules that have been gathered from the landscape, sorted and transported, along a nano-conveyor belt system to the point where they can be reassembled and bonded to the new molecular structure of a part of the city. A tree in the forest is disassembled to the molecular level and transported to the other end of the city and reassembled into the city. On and on it goes, tearing up everything in its path and creating paths where there are none for the sake of creating the city. The city rolls out from the back of the head like a perfectly geometric beaver’s tail: houses and parks and playgrounds and streetlights and furniture and food and even toys. The people of the city find homes but they never grow terribly attached to them because everyone understands the temporal frailty of the city. There is no money and no one seems to care what others have because the city is constantly churning out new designs for the urban fabric. Everyone simply migrates towards the head of the city because that is where the newest of everything is to be found. Of course they also must constantly move towards the head because the rear of the city is always disintegrating literally from beneath the citizens’ feet. It is not so drastic as that, and a house may take upwards of three years to completely disintegrate but it does indeed keep the people moving. On the macro scale then, as a result of the nano-scale, the city operates as a conveyor as well. The disintegrating city is reconstructed into the forest, or sea, or desert or glaciers. Where once was a mountain a new one was built in its place. Everything stays in balance; natural resources can replenish themselves as fuel for the next time the city rolls by and the citizens never tire of the scenery