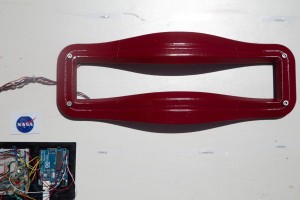 The handhold/foothold addresses:
a. Where people are
b. Where things are
c. What is being used
d. What things are broken
e. How things can be repaired or re-fabricated

The Handhold / Foothold ergonomically designed to be used in several different configurations: in
parallel or at 45 degrees for the feet. Each entire component is 3-d printed (this one is 1/8” structural
acrylic) but they could be printed from any material. The point is that they can be entirely fabricated onboard with in-situ materials. Each component has 6 sensors embedded into it which include: two
occupancy sensors on each side of the handle that let you know where a person is in the ship and even
infer their orientation and four stress sensors that let you know the amount of stress on each joint
where the handle is secured to the habitat. These sensors have three levels of stress including critical
failure so that you are notified if something is broken. The information from the sensors is fed directly
into the BIM model which shows a graphical representation of the sensors input in relative 3-d space via
Rhino/Grasshopper/Firefly and Arduino